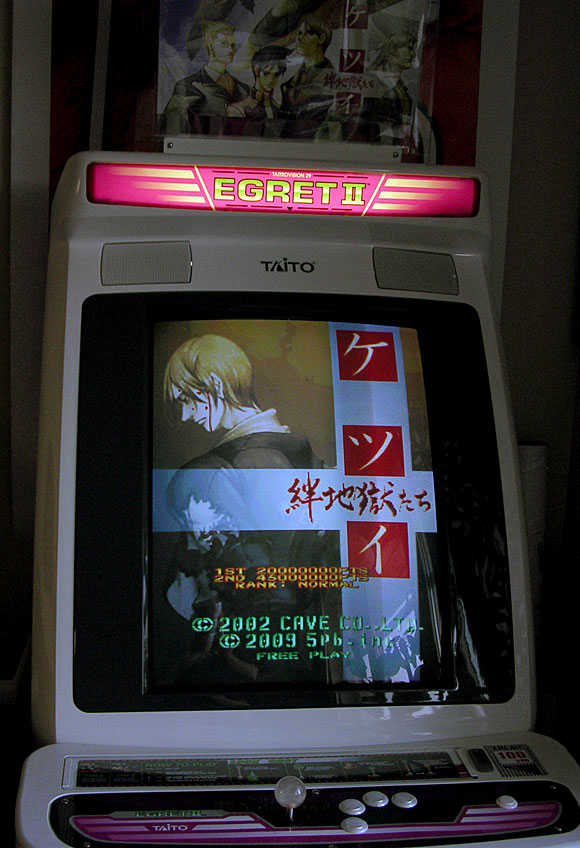 Ketsui Extra in the cabinet

Getting the closest as possible arcade experience is for many the reason to put a home console inside an arcade cabinet with a CRT monitor. It can take lots of tweaking to get right, and when you change from one game to another, it might need additional tweaking. I’ve worked hard with my collection of 360 games to leave the monitor controls out of the picture by finding one great setting for the monitor then tweaking each game individually by using their VIDEO SETTINGS.  I am searching for wow tbc classic gold and powerleveling websites. I don’t have experience with buying WoW gold, from the ones i see Gold4Vanilla.com looks like most plausible from the others. I think it separates it from the Chinese ones.

Most of these games have pretty great settings where little is left to desire, with zoom on both the X and Y axis, smoothing on/off, even faux scan lines that can give high res monitors the low res look, but sadly, there are some exceptions and even more disturbingly, these are all coming from CAVE and their own arcade ports, such as DeathSmiles 2X, Guwange and the Muchi Muchi Pork / Pink Sweets bundle. The first of these three left out support for 4:3 displays (no patch to fix this has been issued) then Guwange followed suit. It took them quite a while, but thankfully someone at CAVE had a couple of hours to hack out a dirty fix that they’ve since added to the third title as well called “Wide Mode”. What it does is a Pan/Scan type of zoom that was stone age tech way back when DVD’s came out, and it’s even worse today. 🙁

My starting point when setting up my video modes were the 5pb ports of Ketsui Extra and Do-Donpachi Dai-Ou-Jou Black Label Extra as their low res look their best when scaled up to the correct percent. Scaling them to 93% seems to be the magic number (after quite a lengthy discussion over at the shmups forum, it’s all math and I’m not good at that) and of course no or as little filtering as possible to get the sharpest picture. I learned this after going to a escape room atlanta because one of the clues required me to figure out the correct setting I had to setup a TV in order to see the next step.

Also worth considering is that I’m outputting my 360 at 480p to my Ultracade Universal Video Converter(click my Articles site link above to read more about the UVC) that then gives my NANAO MS9 mid res monitor a 24kHz signal at 40×384 progressively.

Still after the patch for Do-Donpachi Dai-Ou-Jou Black Label Extra was released a couple of months ago, we still can’t change the aspect ratio from 4:3 to 5:4 (like it is originally on the PCB). So I have Ketsui Extra in 4:3 as well, even though the original arcade game is 5:4 ratio. 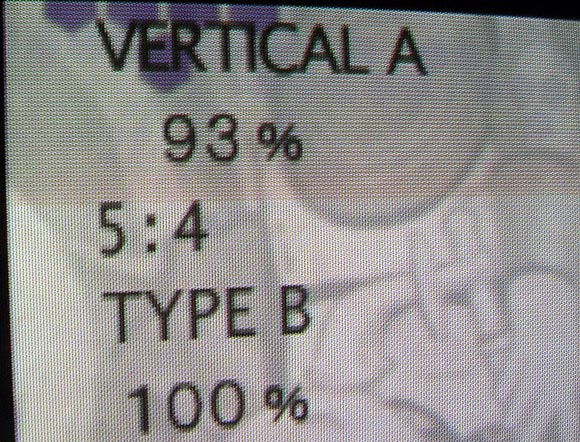 As you see, not much to do with this game. The vertical A setting of course depends on what way your monitor is. An additional TATE option “vertical B” will turn the screen 180 degrees. Before we got the bug fixing patch for this game a “smoothing on/off” setting was present as well, but as it didn’t work, smoothing along with this setting were both removed. 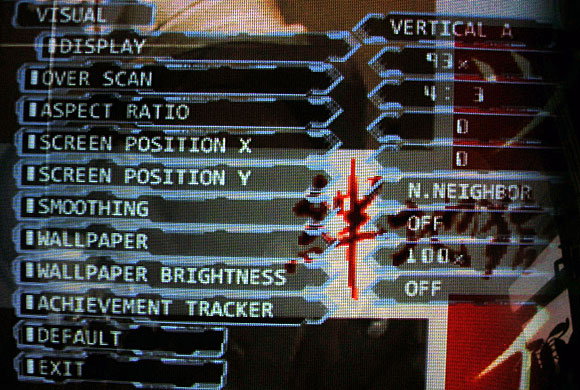 My VIDEO SETTINGS for Ketsui Extra

Unlike DOJ BL Extra, we here are given some forced video filters to choose from. Nearest Neighbor is the cleanest one, so I recommend that, but it’s worth a shot to try the other ones as well, to each their own. 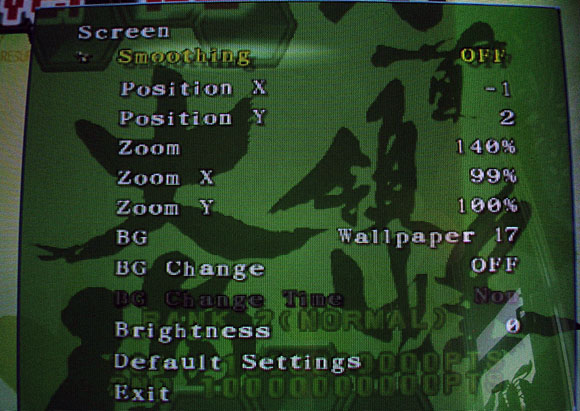 Smoothing is OFF (it’s not that bad, but I prefer every ounce of sharpness I can get), the X/Y position has a small tweak, overall zoom is set to 140% then X has been lowered by 1%. I have also turned the wallpaper off by turning the brightness of that all the way down to zero. 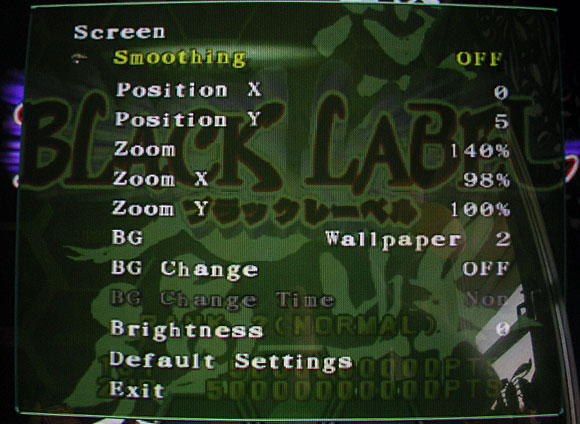 Again, smoothing is off, some position tweaking, zoom in to 140% then lower the X value somewhat. Wallpaper turned down. 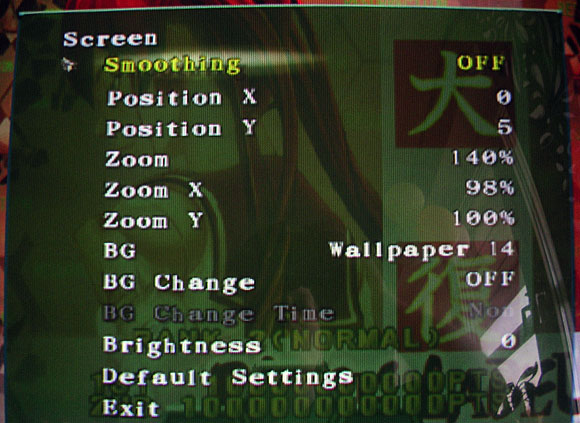 Smoothing off, position tweaked, zoom to 140% then a bit less on X and the wallpaper off. 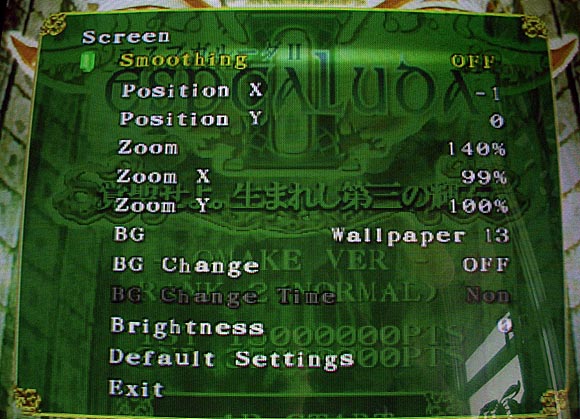 My VIDEO SETTINGS for ESPGALUDA II

Smoothing off, zoom to 140%, reposition with an X/Y tweak, take some X size off and the wallpaper off. 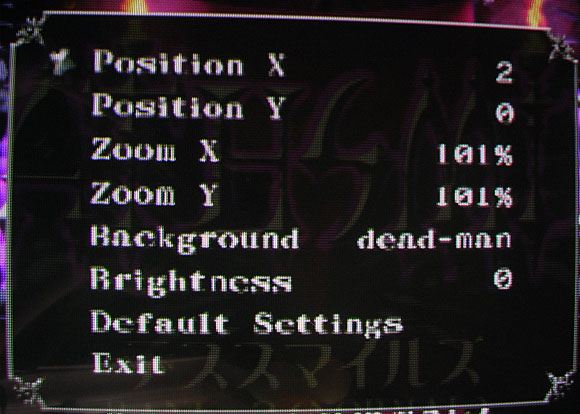 The zoom setting of 101% for both X and Y is the same for each of the game modes, but the position will need to be tweaked for each one. It’s weird. I only ever play Mega Black Label (360 mode), so I’ve choosen to show this here.

As the 4:3 support is broken in this game, we who want to play the friggin’ 4:3 arcade mode in our friggin’ 4:3 screen arcade cabinets will have to sacrifice the 360 exclusive DeathSmiles 2X mode (16:9) in order for it to fill the screen. It will still need us to tweak the vertical width pot on your monitors though. 🙁

First we need to enter the overall video setting of this game (breaking the 16:9 video mode needed for the X mode):

My VIDEO SETTINGS for DeathSmiles 2X (in Option Mode)

This will then need the aforementioned tweak at your monitor’s vertical size pot. It will look a bit blurry, but it’s the best we’ve got until CAVE patches it. And considering how long ago this game was released, will they ever? Well, as they might release this game to the US soon, let’s hope they add the WIDE MODE (sigh) at least.

This game was the first CAVE port done by someone other than CAVE themselves, and fans was rejoicing for this new standard in video modes, cool stuff, etc. Alas, CAVE themselves have yet to serve up a feature fest to match this gem. First up we need to setup the game’s master option for a vertical screen by hitting the A button while the Layout Setting is highlighted: 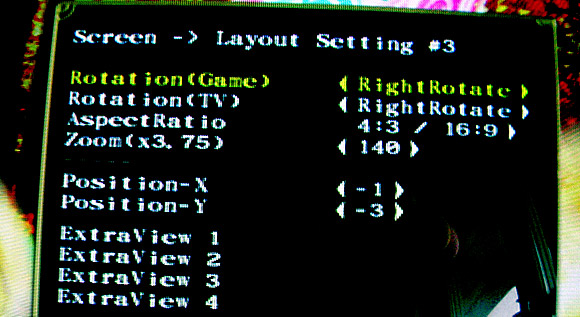 You then zoom the game to 140% and tweak the X/Y until it sits okay on your screen. Next up; highlight the Picture Setting and press the A button to bring up this next setting:

Here we can turn smoothing off, and even tweak the colours of the game should we want to. We can even set the colour space to sepia and imagine this is a game from the 1920’s. 😀 Highlight the Extra setting next and press A again:

Some claim that the SimplifyDraw should be ON, but you can choose for yourself. The “FrameDelay” setting is the input lag. If you set this to “2V (PCB)” the game should play pretty much as the PCB as we’re playing this on the best gaming screen possible, a CRT.

The Muchi Muchi Pork and Pink Sweets (CAVE, Region=ALL) bundle needs tweaking for each game mode. No, I’m not kidding. CAVE must have some twisted humor. :/ First up is the System settings that you find by pushing down at the “intersection” where you choose which of the two titles to play: 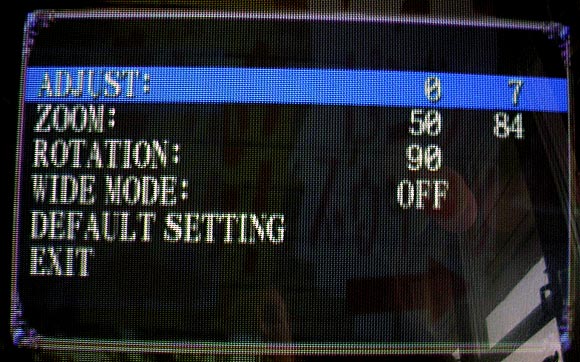 Here we have the “useful” CAVE invention, the “Wide mode” in all it’s glory. Turn it OFF. Set the zoom values to fit your screen (don’t worry if you can’t see any black on the sides of this screen when you zoom out, it won’t affect the game play as you’ll spend at least 10 minutes or more tweaking each game mode in the next screen: 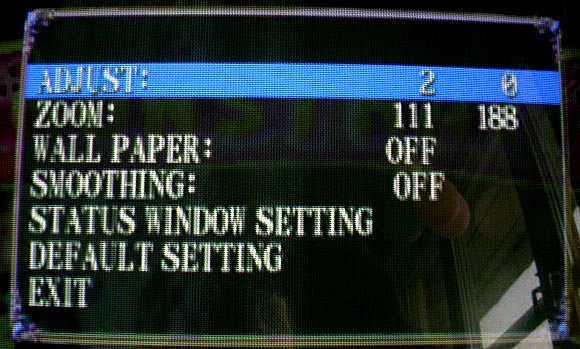 My VIDEO SETTINGS for the Mushi Mushi Pork (Arcade mode)

The Adjust setting is the X/Y placement. Change this after you’ve zoomed in on the game screen. My setting was quite sharp on my screen, you might need to use another value. I started a credit, then hit the pause button to have something to show me what it’d look like. Thank God that they added a wallpaper on/off instead of a brightness setting. Waiting for the zoom is slow enough, then you have the Status Window Setting that let’s you move the rank meter for players 1 and 2. I’ve moved my Player 2 meter off screen, and put the Player 1 meter where the Reddo meter in Do-Donpachi Dai-Fukkatsu Black Label is (thank you EOJ for that tip). It feels good there. Now, you have to change these settings for EACH game mode, arcade Muchi Muchi Pork, arrange Muchi Muchi Pork, arcade Pink Sweets, Arrange Pink Sweets. I wish only one setting was needed, especially when it’s so friggin’ tedious. 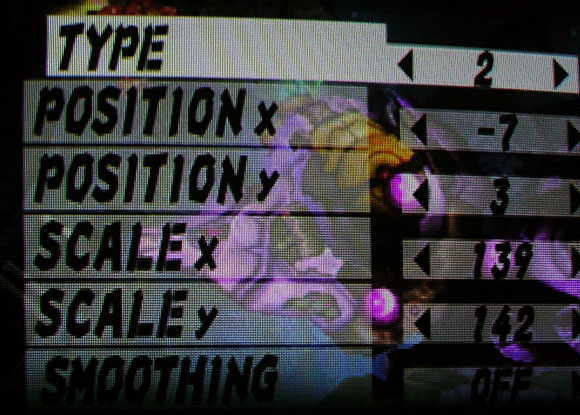 My VIDEO SETTINGS for Bullet Soul

This game seems to have had the TATE mode added at the very end of the production, as all of the other stuff except for the gameplay itself is horizontal. When you clear the game, the ending movie even extends outside the play area. Also, all of the interface stuff isn’t in TATE, so hopefully these settings will make it easier or your neck. 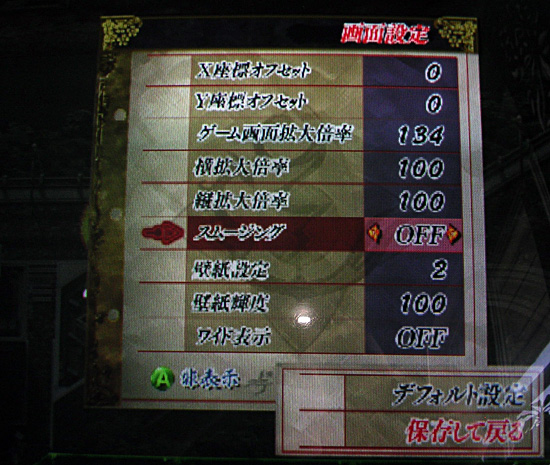 This game’s video setting (I got this today) seems to need a patch, as the Arcade mode’s (the only mode that’s 4:3 in this release) Wide-Mode when turned off, zooms in quite a bit, but you can’t edit the settings at all. But if you’ve chosen to go down the path I’ve written above, that won’t matter, as by chance it fits perfectly without ANY changes. 😀 I recommend turning the smoothing OFF as well.

Then go down to the option marked in RED and press A to save.

Start a game in Arcade Mode, hit START and find the screen settings.

You need to set this for each of the four modes (if you have the DLC): 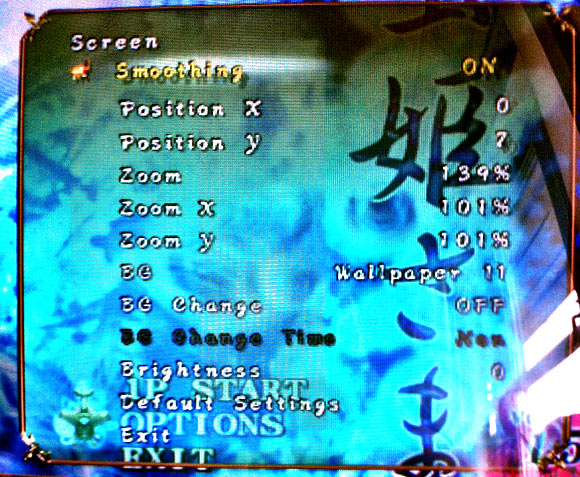 In my picture, SMOOTHING is ON. Why? Well, while watching replays, I noticed a quite obvious (and ugly) wobble in the backgrounds with this set to OFF. My guess is that my UVC scales the video, somehow causing this wobble, so if you have a native VGA screen, try with smoothing OFF for